Golem plays all kinds of Jewish weddings, from Orthodox to Reform, secular, mixed weddings (Jewish and non-Jewish), Russian Jewish, gay weddings, and the list goes on and on, even some non-Jewish weddings where the hora is always danced.

The tisch (table, in Yiddish), a practice where the groom and the male guests sit at one table, while the bride and the women sit at another table in a separate room at the beginning of a Jewish wedding, was long considered a strictly Orthodox thing. Traditionally, the groom gives a “d’var Torah” at his tisch, a speech commenting on a passage of the Torah in order to show off his learning. Shnapps is drunk by the men, and the groom gets a good ribbing by his friends and relatives. At the end of the tisch, the groom is led to the bride’s table for the “badekn,” where he makes sure she’s indeed the correct girl and then covers her face (badekt) with the veil and everyone goes to the chuppah to get married.

Today, outside the Orthodox community, Jews are searching for spirituality, and while some go as far as to include Buddhist elements in their Jewish wedding ceremony, many have taken the practice of the tisch and reappropriated it, so to speak. In many cases, the religious element of the men’s tisch is completely gone and the groom sits with his male family and friends drinking aged Scotch and indulging in some guy talk, jokes, perhaps some roasting, and advice, while the bride sits with her mother, sisters, aunts, cousins and friends, also drinking and talking, in wait for the big moment. Even with the learned aspect removed, the essence of the tisch remains: the bride and groom are separated in a primal way with their own gender and an atmosphere of joking, warmth, ice-breaking, nervous excitement and a real sense of Jewishness can be felt on both sides.  It is a great way to start a wedding, no matter how observant or unobservant you are. 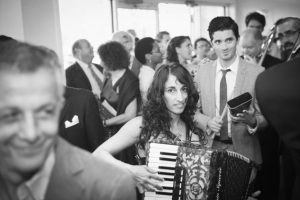 At the end of the men’s tisch, Golem enters the room and stands in the back with our instruments, quietly waiting to lead the groom to his bride. People notice the accordion, violin, trombone and all sorts of hand-held percussion, from tambourines to cowbells to spoons and make a path. When the rabbi or officiant says “Let’s go!” we break into a loud, raucous rendition of Od Yishama and the men start singing or humming along and dancing, pushing the groom forward. We start to walk, a loud, joyful parade to the bride. Once, a groom even put his hands on our bass player’s shoulders, closed his eyes and said, “Take me to her.”

Now we’re ready to get married. This is why you have a Jewish wedding band that knows how to rock.

Feel free to contact Golem if you have any questions regarding booking the band for your event.