Jewish traditions have always been flexible. “Flexidox” is a even a term that now describes the mostly-Orthodox. Klezmer music itself (Jewish music from Eastern Europe) is a hybrid genre. It consists of local (Polish, Ukrainian, Romanian, etc.) music and Jewish musical attributes (ornaments and scales). Orthodox or unorthodox, Jewish culture has always adapted to its environment and has somehow shone through without disappearing.

The same thing should happen in a Jewish wedding. The cultures and backgrounds of the bride and groom should be included in the spirit of the wedding, while the Jewish soul, otherwise known as “Yiddishkayt,” still shines through it all. Golem as a Jewish wedding band has created this multicultural Jewish vibe hundreds of times, each wedding different and unique. We have sung mariachi songs followed by “My Yiddishe Mama,” played a Chinese song during the ceremony. Moreover, we have broken into “Siman Tov” after an  groom stepped on a coconut instead of a glass, mixed Russian pop from the 1980s with American rock songs, and created a hora medley of Jewish simcha tunes and Italian tarantellas.

Instead of the Jewish element becoming buried in all this “other” stuff, on the contrary, the contrasts only strengthen the Jewish music and feeling. The more you mix it up, the better! c

We bring a Jewish vibe, often described as “very New York,” to any party. Melting pot that it is, New York with so many other cultures lets its Jewishness hang out more than it does anywhere else in the world, even Israel! Wherever we go to play a wedding, we bring the New York Jewish wedding with us. A Italian groom said to us, “Where else would you have a Jewish wedding but New York?” But New York doesn’t have to be physically contained in the five boroughs – it can move! Just as Jewishness always shines through, New York can freely travel. We have played Jewish weddings in San Francisco, Chicago, Miami, Washington D.C, Baltimore, Portland, Maine, even Paris. We always bring a little NYC and a lot of Yiddishkayt with us.

Feel free to contact Golem if you have any questions regarding booking the band for your event. 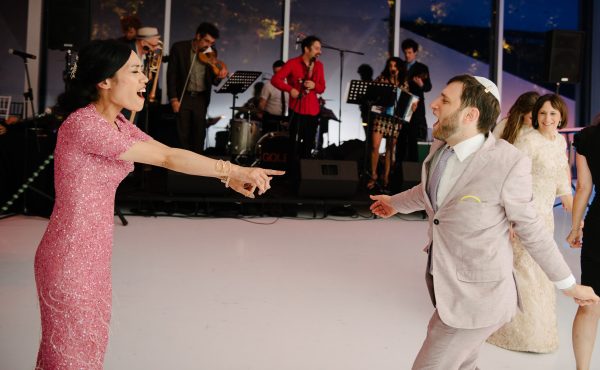